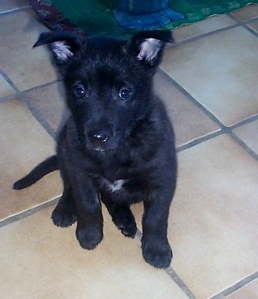 The Brindle Dog when she was a pup.

My ex and I first met the Brindle Dog when she was two weeks old. Her mom Asja and dad Tommy were KNPV dogs, and through a complicated backstory, we ended up paying two hundred euros for a pup from this litter because Tommy’s owner felt sorry for us.

We visited the Brindle Dog and her littermates every week until we could take her home. When she was four weeks old, we chose her for three reasons: she was toddling around exploring more adventurously than her siblings, she had a lovely golden stripe running down the inside of her right front leg, and when my ex picked her up to cuddle her, she fell asleep all limp and trusting in her new papa’s arms.

We took her home at six weeks old. Too young, really, but she was the last pup left, as Asja’s owner wanted them all sold so he could work his dog again. This was back in the old days when I still believed good dogs were bred, not rescued. She was quite ridiculously adorable, although the other two dogs at home were disgusted with us for bringing her home. She was a wigglebutt right from the very beginning. In the dictionary beside “Wigglebutt,” her picture is there not as an example but as the Platonic Ideal of wigglebuttism.

The life of any beloved dog is full of happy stories and sad ones, the times we fear for them and the times we are frustrated or angry, the many shining moments and days and years of joy and delight. But they get old. If we’re lucky, they get old, and that’s when the real dread starts, at least for me.

I love an old dog, don’t get me wrong. Anybody can love a puppy, but an old dog with a grey muzzle whose every twitch and bark is familiar, an old stiff dog who trusts me to keep her safe, who turns to me for comfort and affection, a sweet old grumpy, ornery dog who has earned her comfortable bed and who is first in line for treats and toys, an old dog like that is what all those years of relationship are leading up to, in my opinion. All the tennis balls and sticks thrown, all the poop picked up, all the training classes and long walks and new tricks and puke on the carpet, all the wags and wiggles and whimpers, all the vet bills and cuddles, all of it melds into the experience of This Old Dog, the Oldest Dog who is always the most important dog in the house.

The Brindle Dog has been the oldest dog since her older pack-sister died in 2010. But only now is she really an Old Dog. Her hearing is starting to go, especially if there is background noise. She has a cataract, so her depth perception is impaired, which means treats tossed at her are likely to bounce off her nose, or be snapped at frantically as they fly by her head. She is stiff from a bone spur in her spine, and she can’t run as much as she used to. Her muzzle is grey and she is going grey between her toes (which is seriously cute).

None of this is a big deal. We all get older and greyer and stiffer. The Brindle Dog loves her life, and I am nowhere near having to consider the end. But the last couple of months have been iffy. In April, she was suddenly drinking and peeing too much, she was desperately anxious (even by the standards of a very sharp and anxious dog), and she suddenly refused food—which is practically death’s door for a food-driven dog like her.

A trip to the vet, a urinalysis, some swabs, and twelve vials of blood (that’s what it seemed like!) later, we discovered that everything was absolutely fine except that her ALT, which should have been a maximum of 121, was 2014. That is not a typo. Every other test was fine, but the ALT was sky-high. So we did a bile acid test to see if the liver was functioning properly (is the liver itself messed up? Or is something else messing up the liver?). The bile acid test was an adventure, as it involved two trips to the vet exactly two hours apart for two blood draws, with a fatty meal after the first blood draw ( I went for canned cat food, which in the Brindle Dog’s opinion was fan-frikkin-tabulous). The Brindle Dog does not do well with other dogs, and she does not do well with blood tests. But the vet techs were fantastic, and I am lucky enough to have found a vet clinic where I can stay with my animals at all times.

The bile acid test showed that the liver was functioning properly, so it was time to investigate further. I was torn. On the one hand, I wanted to know what was wrong so I could care for her properly, but on the other hand, I am not prepared to do any surgeries on her, or even to do any biopsies that require sedation. So what would be the point of spending money I don’t really have on lots of diagnostics? What were we trying to find out and what could be done about any of the possibilities? The Brindle Dog has a severe sensitivity to anaesthesia, and the last time we tried it (in an attempt to have her spayed), she lost pulse and breath after only the pre-anaesthetic sedation, and had to be revived. She’s an old girl who has had a good life, and I am not prepared to take those risks with her. I just wanted to know what was wrong so I could give her the appropriate palliative care if that was necessary, or to treat it if it was treatable.

The vet suggested an ultrasound to narrow down the diagnostic field. All my vet tech training was completely out the window at this point, and I could barely make a decision. The vet was so patient and kind, explaining everything in very simple terms and in short pieces, pausing often to play with the Brindle Dog and let me digest the information. In the end I decided to approve the ultrasound, to get more information. Basically, what I feared the most was cancer, and an ultrasound would go a long way to either laying that fear to rest or else confirming it so I could face it head-on.

When the Brindle Dog and I attended for the ultrasound, the vet agreed to let me help hold her. First she had to be shaved, and the techs warned me my dog might struggle when they put her on her side to have her abdomen shaved. I asked them to hold on a sec, and then my dog and I had a proud moment. Anxious and muzzled as she was, she sat when I asked her to, then did a lovely “down” on command, and then I asked her very gently to show me her belly and she rolled on her side, lifting her front paws and watching me to make sure I wasn’t going to abandon her in that vulnerable position. I got down on the floor and hugged my good, trusting girl and told the techs to go ahead. I was really so glad that even in that stressful situation, my sweet old dog trusted that I would keep her safe!

The ultrasound was fascinating. It’s something I didn’t learn in my vet tech training, and the vet who did it was talkative. No tumours, no tumours, no tumours! The spleen was lovely and supple and healthy, the kidneys were good, everything looked great except for a “slightly plump adrenal gland,” and the liver. Oh, the liver, all stippled and grainy, with the portal and hepatic veins in weird relation to each other. “I am not happy with the architecture of the liver,” the vet told me, but it was non-specific. Basically a bunch of stuff got ruled out and now we had a handful of potential diagnoses instead of a mind-boggling array. Cushings, maybe, or canine hepatitis. But the most likely culprits were still trauma and toxins.

Personally, I didn’t believe it could be trauma because I felt I would have noticed if something like that had happened, even if it happened while I was at work. If she and the Fluffy Dog had fought, or if she had a bad fall off furniture or stairs, I’m 99% sure I would have seen it on their behaviour when I got home. But toxins I could very well believe. I had renovations going on in my basement, and no matter how often I asked the contractors to do the cutting in the driveway or to lay down a tarp, the yard was constantly speckled with piles of sawdust from OSB or Masonite or whatever other materials were being sawn. And there is very little the Brindle Dog likes better than wood, fake wood, wood dust, or any new and interesting gunk. So I spent a lot of time shoveling that stuff out of the yard along with the underlayer first of snow and later of mud as the season progressed, but I know for sure—because I saw her and shrieked every time—that she did ingest it multiple times over a few months.

After the ultrasound, the vet recommended Zentonil Plus for two months followed by another blood test to see if the liver had repaired itself at all, which would give us more info. I researched Zentonil because it was not described as a medication but as a neutraceutical and I was all “I’m not paying $200 for some unproven herbal remedy!” Zentonil’s two main ingredients are SAMe and milk thistle. I tried to find clinical trials in dogs with liver disease for both ingredients and could find more evidence-based research for milk thistle / silybin (although even that was scant). So I went looking for a silybin supplement that was human-grade and approved by Health Canada (with a DIN number to prove it), since otherwise there’s no way to be sure that the product really has the amount of active ingredient it claims to have… And when I mentioned this to Cookie’s mom, she had a freshly-opened vial on hand which she was happy to give me (DIN number! Appropriate expiry date!). I looked at the dosage in the Zentonil Plus, transposed that onto the number of drops per day of this stuff, and presto, I had a supplement I could live with.

Well, this is a long story. But the happy conclusion is that last week I took the Brindle Dog in to get her ALT retested and it came back at 50 (maximum should be 121; problem result was 2014). So whether the liver was affected by a trauma or a toxin or a disease process of some sort, it has now healed itself. All the fears of tumours or other end-of-life problems are laid to rest, and I can hope to have my good old girl with me for a few more years. Eleven is already old for a Dutch Shepherd, but not ancient. I look forward to all the time I still have with her.

4 thoughts on “Old Dogs: When the News is Good”