We’d burn all kinds of stuff in the fire pit. Photo credit probably goes to my dad.

My brother and I were reminiscing the other day about what it was like being little kids in the seventies. We used to run around in the bush down by the creek with our dog, building forts and climbing on beaver dams, and dodging trains on the train bridge. Man, we were little and brave. Our dad would give a long wailing whistle using both his hands flapping in front of his mouth like wings. The dog’s ears would perk up; our ears would perk up; all three of us would turn our faces towards home and scramble up embankments and over logs as fast as our little legs could move. (Well, the dog’s legs were considerably longer!) It was the seventies: kids could play in the bush by a creek for hours, and nobody was worried.

Out at Uncle Wally’s cabin, the adults would give us some sawed off stubs of two-by-fours, a couple of hammers, and a rusty can of nails. END_OF_DOCUMENT_TOKEN_TO_BE_REPLACED

Last night, Skratch Bastid’s BBQ came to Winnipeg. It was on from 1500h to 2300h in the parking lot of Union Sound Hall, and I really wanted to go. But for most of the day, it was too damned hot to dance, and sitting around drinking with strangers isn’t really my thing. So after careful consideration of information found on Facebook and Instagram (and of my pathetic budget), I decided to “steal” the Skratch Bastid show and then head over to the Cube to see Mama Cutsworth. END_OF_DOCUMENT_TOKEN_TO_BE_REPLACED

This isn’t a book review: this book changed my thinking about the relationship between logic and emotion, but I read it so long ago (2008) that I can’t really “review” it at this point. Before I read this book, I had vague thoughts and feelings about how ridiculous it was that our culture believes so strongly in a mind / body split, and that we so strongly privilege logic and reason over emotion (which, in our cultural stereotypes, also feeds into privileging men over women, whites over people of colour, and so on). In this book, Antonio Damasio (a neurologist), shows how logic and emotion must work in concert in order for people to make reasonable decisions. END_OF_DOCUMENT_TOKEN_TO_BE_REPLACED

Today’s post by The Bloggess is called The small things are the big things. She talks about how we tend to weigh negative things more heavily than good things. I was hesitant to read further in case it was one of those platitudinous positive thinking posts, you know the ones, where NOTHING BAD CAN HAPPEN TO YOU IF YOU THINK POSITIVE and YOUR ATTITUDE SHAPES YOUR OUTCOME and YOU ONLY HAVE CANCER BECAUSE YOU’RE NOT THINKING POSITIVE ENOUGH and all that crap. This context-free pushing of positive thinking completely overlooks the factors in people’s lives that they have absolutely no control over. END_OF_DOCUMENT_TOKEN_TO_BE_REPLACED

The Fluffy Dog on a hot day, defeated by the heat.

Over about three hours today, the temperature dropped from 30-feels-like-41 to 20-feels-like-26, and the rain started. Not the wild thunderstorms promised by the Weather Network, but a nice steady gentle rain. The dogs were wild with joy (granted, this is a common state for the dogs, but still): the Fluffy Dog got all uppity and started singing the song of his people, while the old Brindle Dog paced between me and the door, pointedly squeaking for attention. I get it, I told them (come on, we all talk to our dogs). You want a rain walk. END_OF_DOCUMENT_TOKEN_TO_BE_REPLACED

What stops me from doing new things is that I can’t instantly do them perfectly. So frustrating! All those years of being an A-student don’t seem to translate into instant skills in other areas. I’m no Ella Fitzgerald, no Emily Carr, no Margaret Atwood, no Scratch Bastid, no Frida Kahlo. But I read a post by a sister blogger the other day (I Can’t Turn my Head to the Right) and it reminded me—again—that the trick is to do it anyway. END_OF_DOCUMENT_TOKEN_TO_BE_REPLACED

Sure, the pedicure was good—but I’ve experienced better spa environments. People talk about Ten Spa as if it is a high-end, world-class place, and so my expectations were pretty high. However, when you get off the elevator on the tenth floor, it’s not immediately clear which way to go, so instead of stepping straight into a luxurious relaxation experience, I had that moment of confusion which way should I go? uuuuhhhh, well, I’ll try this way! END_OF_DOCUMENT_TOKEN_TO_BE_REPLACED

Super disturbing and easily misinterpreted picture of the Fluffy Dog’s tail after shaving the hot spot.

It’s been hot and humid in Winnipeg for what feels like ages. The Fluffy Dog and the Brindle Dog are both blowing coat out of season, trying to cool down. Old Brindle is easy to defluff; her fur is so short that I just rub her enthusiastically when we’re outside, and the plucks of undercoat peel away and float to the ground. The Fluffster, though, is a different story. END_OF_DOCUMENT_TOKEN_TO_BE_REPLACED

The cover of Finding Water by Julia Cameron.

Many years ago, I read The Artist’s Way. I remember liking it, so I had hoped to like this book (the third in the series) just as much.

The cover of The Secret History by Donna Tartt.

The characters in this book are so fascinating to me. They often act in ways that surprise me, but once it happens, it feels like of course, it had to be that way. The main characters are (and remain) mysterious, even the protagonist, despite the story’s first-person narrative. END_OF_DOCUMENT_TOKEN_TO_BE_REPLACED

Went to the Winnipeg Folk Festival on Saturday for the first time in nineteen years. I picked a great day for it: There was a weather warning because of the extreme heat and humidity, and thunderstorm warnings for later in the day. On Friday evening, a nurse friend working a twelve-hour shift at Concordia Hospital texted me to let me know that Emerg was full of Folk Festers. “The heat?” I asked, and she replied “Overheated… and a few bad cookies.” END_OF_DOCUMENT_TOKEN_TO_BE_REPLACED

I love the Internet. I’ve loved it since I got my first email address in 1992 and built my first web site in 1994.

Meatspace is not always comfortable for an introvert like me, but I have met friends, colleagues, partners, and a whole whack of other fascinating people online. Some of these connections have moved from “virtual” to “real” life. Many haven’t. Either way is a-ok. END_OF_DOCUMENT_TOKEN_TO_BE_REPLACED

It’s not the kind of thing I expect to see on my way to work. Traffic slows a bit and I am more irritated than curious. But today was different.

First I saw the car stopped in the middle of the oncoming lane, then I saw the two people moving off to the side of the road, one supporting the other who was limping badly. Then I saw the bicycles lying in the grass. END_OF_DOCUMENT_TOKEN_TO_BE_REPLACED

Cover of the book Fledgling by Octavia E. Butler.

J. had a pile of books to give away and I was the first one at her door, hoping to beat the rush so I wouldn’t have to actually elbow her nieces out of the way. It was great! I came away with about fifteen books and the first one I read was Octavia E. Butler’s Fledgling. I’ve read books by Butler before; the Xenogenesis trilogy pretty much blew my little mind, although I was less enthused about the Parable books. Fledgling, however, makes up for that. END_OF_DOCUMENT_TOKEN_TO_BE_REPLACED

Picture of the cover of Stage Fright by Harry Bruce.

This book was so much fun! It started with the history of paper and writing implements, moving on to typewriters and computers, and ending up with drugs, sex, suicide, and superstitions, with stories about how famous writers throughout history have written. What tools they use, what rituals they followed, what superstitions they had, what drugs they did, how they viewed writing itself… END_OF_DOCUMENT_TOKEN_TO_BE_REPLACED 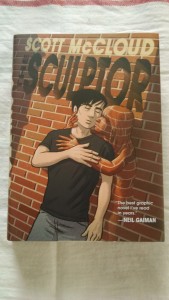 Picture of the cover of The Sculptor by Scott McCloud.

This is one of the very few graphic novels I have ever read. I almost didn’t read it because I thought it was the story of a man who does a deal with the devil to have amazing skills as a sculptor and who then sculpts a “girl” who comes to life and is his “dream girl.” And frankly, very little could be both so boring and so irritating. But I thought I’d give it a chance if only to try to understand the graphic novel genre a bit by expanding my limited repertoire. END_OF_DOCUMENT_TOKEN_TO_BE_REPLACED