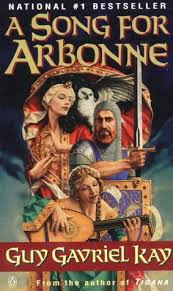 Cover of A Song for Arbonne by Guy Gavriel Kay.

This is maybe my sixth or eighth time re-reading this book. It’s one of my “feel-good books,” a go-to when I am feeling the need for both entertainment and the comfort of the familiar. Some people watch movies over and over to get this, but for me it’s books. Kay’s books tell stories I enjoy in a way that I like. The storylines linger on relationships between people and how influential those relationships are, but there are also politics and wars and romances and magic and intrigues. I always like Kay’s imaginary worlds; Arbonne and its neighbouring countries are no exception.

Sometimes I am a little frustrated that Kay relies so much on problematic gender stereotypes. While I do understand that the fantasy genre is fairly reliant on those stereotypes, Kay’s imagination and transformation of those tropes in so many other ways makes it all the more disappointing that he doesn’t take one step further and actually imagine a world where women—even in a country like Arbonne where women ostensibly wield great power—aren’t still subject to arranged marriages, sexual violence, and laws / customs decreeing obedience and submission to their husbands. Also, all the heroes and heroines are always beautiful and handsome, which I understand is another genre convention but gets rather tiresome, since the corollary is that the ugly or disfigured people are the bad ones.

But this is not a violent book, don’t get me wrong. As with many of Kay’s other books, it’s a lovely story, beautifully told, with complex characters who are given room to grow and change their perspectives and opinions over time. The only thing I didn’t like so much about this particular book was that the ending was kind of deus ex machina, and wasn’t really thought through to how it might cause more problems than it solved (I can’t say more because spoilers). But even this was nicely done, and it was a plot twist that is not actually unusual for the genre. It’s just that once in a while Kay tries to out-clever himself, I think, and gets a bit carried away.

I liked it, and will read it again (and again, probably). The characters and countries, the feuds and loyalties, everything is so beautifully described and fitted into place. It’s a book I like to read when I am stressed because I know every twist and turn, so I am not surprised by what happens (as when I first read it), but am carried along a familiar and pleasant path. In the end, mostly good things happen to good people, and mostly bad things happen to bad people, but almost nobody is purely good or purely bad.

Coincidentally, this book might be in The Reader’s Room‘s March Madness Reading Challenge. I voted in their poll today and saw this book there as a contender, as well as Room, which I reviewed last year, and which I loved.

A while back, I reviewed one of Kay’s other books: The Lions of Al-Rassan. I glanced over that review when I dug out the link and I see that I had made many of the same points as in this one, although somewhat more long-windedly, right down to the bit about Kay trying to be too clever. Oh well, at least I am consistent in my opinions!

1 thought on “Finished this book: A Song for Arbonne by Guy Gavriel Kay”