It’s been about eight weeks since I found a lump in the back of the Brindle Dog’s left thigh that is almost certainly a mast cell tumour.

The tumour grows a bit, and then shrinks suddenly as it releases histamines, heparin, and proteolytic enzymes (which break down proteins) into her system. Eventually, as the tumour grows and more of these substances are occasionally released all at once, she might start getting allergic reactions, stomach ulcers, and other damage.

For a couple of weeks, she was starting to act a bit differently. She was panting more. She occasionally vomited a bit of white froth (which is new for her). She was a bit more agitated, almost frantic sometimes, although she could  still sleep next to me on the couch for hours, so it was up and down. I was not sure which of these things might be indicating some pain, and which were part of her normal heat cycle (she was due in April sometime). When she goes into heat (and for a month or so beforehand), the Brindle Dog does get fairly phrenetic, but I wanted to rule out possible pain. So I went to the vet and got a short trail of pain meds. I also wanted to prevent the formation of stomach ulcers, rather than only addressing them symptomatically later. The vet agreed to that and so I’ve started her on a low dose of famotidine (the same ingredient found in Pepcid).

After four days on the painkiller, there was no change in the Brindle Dog’s behaviour, so I stopped the meds. Obviously, the panting and agitation was about her upcoming heat cycle and not due to pain, which was a great relief. And sure enough, at the end of March, she went into season and the Fluffy Dog promptly lost his little mind. Even though he is neutered, he is pretty intent on doing the nasty, and the Brindle Dog does everything she can to encourage him, dancing around and crooking her tail out of his way. I used to just let them do their funky thing, but now, with the Brindle Dog’s tumour and increasing weakness in the hind end, I don’t want to take the chance of him hurting her, especially since he outweighs her by twenty pounds. So they’re separated all the time, except at night, when they weirdly both sleep peacefully in my bedroom without paying attention to each other until the split second my alarm rings in the morning and they crash back together like magnets. 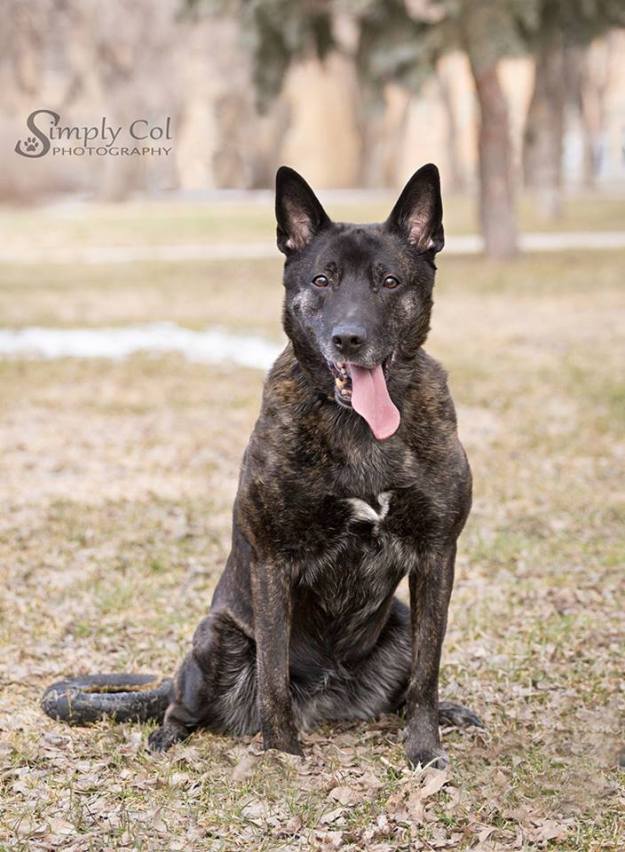 Back when I found out about the tumour, my mom suggested a photography session with my old Brindle Girl. I dismissed it as silly, but the idea had taken root and started growing. There’s a pet photographer in Winnipeg who does fabulous work. Her name is Colleen Blouin of Simply Col Photography, and she is passionate about photography and pets. She also does free sessions for shelters and rescues, generating gorgeous photos to help those animals get adopted. We met up just before the Easter weekend for a photo shoot at the Brindle Dog’s favourite park. Colleen was efficient, experienced, and a pleasure to work with, as well as being a lovely person. The Brindle Dog and I had a lovely photo shoot, although when we got home, we both climbed onto my bed and napped for a couple of hours. I love napping with that old girl stretched out against me.

Colleen, the photographer, blogged about our photo session and put up most of the pictures. I would encourage you to take a minute to go see how well the pictures turned out; Colleen really knows what she’s doing, and of course the Brindle Dog is a gorgeous model. 🙂 (The pictures in this post are from that photo session, but there are more over at her site.)

Meanwhile, my old dog is on Day Two of her new dietary supplements, some Chinese herbs in a formula called Stasis Breaker. If she tolerates that, we will add Max’s Formula to the mix. This is under the supervision of a veterinarian, and will be followed by some “top dressing” to her diet, mostly fruits and veg like dark leafy greens, berries, figs, tuns and sardines, etc. Slowly, of course, so she doesn’t get cannon-butt. But she will love it. Both dogs are so delighted when I add extras to their meals.

In general, the tumour is a bit larger than it was eight weeks ago, with occasional shrinkage as it “drains.” The Brindle Dog doesn’t seem too bothered by it yet. She falls more, especially on stairs, or when running, or on turns. But she keeps on trucking, and never complains.

I haven’t changed much about our daily routine. I do try to walk her more now that the weather is nicer. But I have always touched her a lot, and always talked to her a lot, and always praised her a lot, and always smiled at her a lot. So there’s no need to try to make her last days / months / years (I hope!!!) extra-special, because our life together is always extra-special. She is my honeybun, my bunny, mijn kwispelseherder, my sweetie-patootie, my extremely very good girl, my little old lady, mijn mooi klein meisje, my wigglebutt, mijn lieverdje. It’s simply not possible to love her more than I already do. I am so lucky. 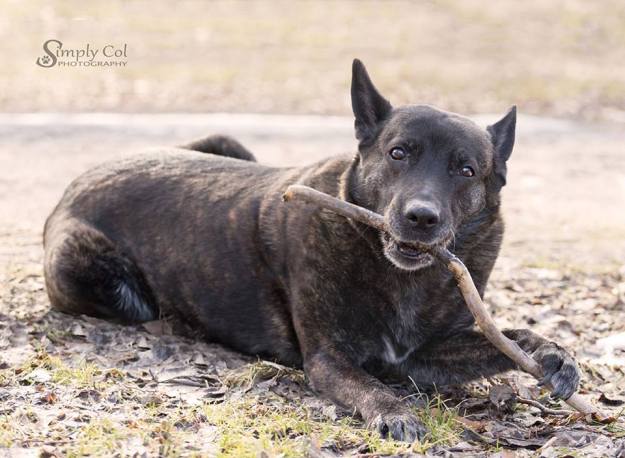 16 thoughts on “The Brindle Dog Smiles for the Camera”