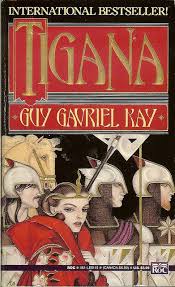 There aren’t a lot of men on my list of favourite authors, but this guy is one of the exceptions. I’ve read most of his books many times. They are “comfort books” for me: lovely stories well-told. This is probably my tenth or twelfth re-read of Tigana, and I’m keeping it to read again.

Before the book begins, a conquering sorcerer’s son was killed on the battlefield, and the sorcerer exacts a comprehensive revenge on the people in the province where his son was killed by setting a cruel spell upon them. The story after that is pretty standard fantasy fare: the youngest son of the province’s prince is secreted away and grows up with the desire to avenge his province and undo the spell on his people, aided and thwarted along the way by various friends and foes.

One of the things I love about Kay’s writing is that in most of his books, female characters are as strong and resourceful as male characters. He stops short of creating worlds in which there is actual gender equality, unfortunately, and this applies also to gay relationships; they exist in some of his books, but still within a context which does not accept them. So I do find the gender relations problematic and definitely polar (men are men and women are women, and the good ones of each are also beautiful / handsome, and there’s no in-between).  But at the same time, the main female characters are on equal footing with the men in terms of having their opinions and autonomy respected by others.

Something that often irritates me about fiction—not just this kind of sword-and-sorcery stuff, but all kinds—is when the “good guys” are purely good and the “bad guys” are purely evil. Tigana is full of “heroes” who have to make hard choices and ethically dubious decisions, and “villains” who love their children fiercely and are capable of tenderness. It is a pleasure to have some depth to the characters and to see how their internal struggles and the “outer” plot play off each other.

A definite keeper, this one.

4 thoughts on “Finished this book: Tigana by Guy Gavriel Kay”